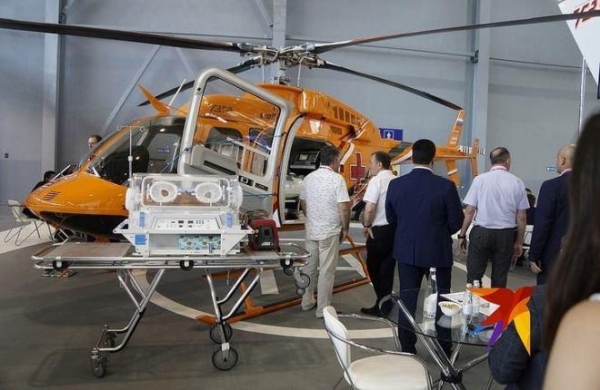 Sverdlovsk region will receive helicopters Bell-407, production of which is established at the Ural civil aviation plant (UZGA). This follows from the agreement between UZGA, regional government, National service of sanitary aviation (NSA; JV of state Corporation and “Heli-drive”) and the Ural optical and mechanical plant (UOMZ; included in “rostec” and specializiruetsya in the manufacturing of medical equipment) about the development of sanitary aviation signed at the exhibition “Innoprom-2018”. The agreement “will allow to create on the territory of Sverdlovsk region the conditions for the development of aviation, including the production of sanitary aircraft, to arrange for the substitution of the onboard medical equipment in cooperation with the leading regional manufacturers of medical equipment”, — stated in the message NSSA.

Medical modules for Bell-407 will produce UOMP. The first helicopter designed for transporting patients, presented at “Innoprom-2018”. As told the publication “Ekaterinburg-online” representative UZGA Alexey Kositsin, bought NSSA by order of the Ministry of health. The helicopter on duty in Ekaterinburg in the end of July — early August, 2018 in Addition to this machine NSSA intends to buy 32 aircraft, two of which sebirouth in Idel and the city, and the rest “will work for Russia”, — said the head of the northwestern branch of NSSA Dmitry Kozyrev. Top Manager said that the cost of the helicopter together with the equipment — 257 million rubles. Thus, it appears that the total ordering NSSA for helicopters in the medical configuration is estimated at about 8.5 billion.

Recall that “rostec” plans to organize on the basis NSSA a single Federal operator of air ambulance in Russia. It was originally planned that under this project, approved in January of this year, Russian President Vladimir Putin, will be released more than 100 “Anatov” by 2021, while other aircraft then was not mentioned.

According to RBC Ekaterinburg, citing CEO Vadim UZGA Badejo, in addition to helicopters Bell-407 plant in the framework of the development of sanitary aviation will be engaged in the supply of aircraft L-410 (their Assembly is also localized on the company) with a medical module. Earlier, in November 2017, a top Manager said that in 2018-2019, the plant will collect 29 regional aircraft, which has already signed firm contracts.

Localization of production of Czech turboprop regional aircraft L-410 on UZGA will grow gradually. So, according to the plans of the Ministry of industry and trade full import substitution of the airborne equipment was scheduled for 2019, and in 2020 it was assumed to replace foreign engine GE H80-200 domestic.